Hummus is on the rise. We’ve already discussed the rise of web searches for hummus on Google. The following examples don’t dive into stats and graphs, but show the success of hummus in North America. First, let’s look at this picture inflatable slides: 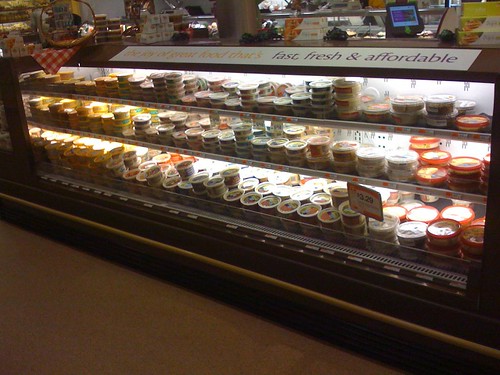 We see here a full aisle of hummus in a supermarket. Not a shelf in the organic foods stand. Not a product in a remote corner for imported goods, but a significant floor space in a regular supermarket.

I guess that our Middle-Eastern readers are unexcited. But this picture wasn’t taken in the Middle East, but in Arlington, Virginia, USA. Arlington is one of Washington DC’s many suburbs. You may say that Washington is an international city with many immigrants, so this scene just answers demand. Just note that also the photographer is surprised (but satisfied).

Now, here’s a fresh article that proposes a green version of hummus. The article compares the recipe it gives to hummus. This is already an indicator that hummus already gained traction and is known rent Jungle Bouncer to the public. The other sign is the articles’ publisher: The Calgary Herald. Calgary is in the province of Alberta, Canada. The city is famous for something smooth – snow, not hummus. Calgary hosted the winterÂ Olympics in 1988.

I’m sure that American readers have seen more hummus around them, and can share examples of their own. Hummus is gaining ground with American consumers, but it’s still the tip of the iceberg.

In their vision, hummus providers such as Sabra and Tribe want to see hummus stand alongside other common dips such asÂ mayonnaise and ketchup. There’s still a long way to go. We’ll discuss this in a separate post.

My girlfriend and I just returned from a fabulous trip in Georgia. The country, not the US state. In 11 days, we just got a taste of this country. The taste is excellent!

END_OF_DOCUMENT_TOKEN_TO_BE_REPLACED

After over a decade of programming, I now turn to a different path in my career: pro-blogging.

I’ve already written this post in Hebrew, but it’s important enough (for me) to write it again in English.

This career shift wasn’t trivial: it’s easier to continue life as it is, without making any changes. My employer until last week, was Metacafe, a company that I enjoyed working for, and was definitely my best employer in the industry. With a comfortable atmosphere, and being situated 10 minutes from my house on foot, it was very convenient.

This blog is alive for over 3 years. In addition, I’ve been involved in a few more projects in the blogging scene. I enjoy this very much. In the past few years, professional blogs have sprung all over the world.

This gave me inspiration to start my own professional blog, in a field that I’m familiar with, and is also lucrative: foreign exchange.Â Forex Crunch consists of daily and weekly outlook, technical analysis, opinions and everything that is forex-related. It’s my main project at the moment and the most mature one.

I assume that most of the readers of this blog aren’t too keen about forex, but may find much more interest in another project: The Networking Blog. I’m co-authoring the blog with Doron Gez, who is a master of social networking. We write about all the aspects of networking – referring to social sites and also to real life practices and experiences.

I’ll post more projects along the way. But don’t worry, this blog will remain personal and political (of course). And it’ll stay ad-free.

For those of you that worry about this insecure future, I’ll add that I’ve saved enough money during my hi-tech years for a long period. I’m very optimistic about my new path, but if things go wrong, I can always go back to programming.

Not only I praise my city Tel Aviv. Also other residents. Most Tel Avivians like the city during weekdays, when it’s alive, vital, around the clock, creative and interesting.

On weekends, the city becomes a hub for the whole metropolis, thus drawing people from the suburbs. We’re used to it, and there are places that we prefer over others.

In this centennial year for Tel Aviv, there are lots of special events. Some events happen every year, but this year they’re bigger. The last event was the “White Night”. This idea was copied from Paris (I think), and is quite positive: during this evening, galleries, museums and other places are open till later hours than usual.

There are also lots of music shows on the streets. Music on the streets is common in the city, and in the “White Night” it’s extended.

This time, the municipality decided to make a huge event out of it: Rothschild avenue was closed to traffic, and there were special activities there.

They also spilled money on publicity. The result was that too many people flocked into town. While I like the vitality of the city, the masses were impossible to handle.

You couldn’t get close to any show, queues from galleries were enormous, and if you wanted to eat or drink something, you should have brought a sandwich from home. The celebrations turned into a gridlock.

I live near the center of Rothschild avenue, and in a very central part of town anyway. Also the small alleys here were crowded. I should have sold something from the window in my living room!

I escaped to the southern neighborhood called Florentine, which apparently wasn’t recognized by the city. It was quite deserted. Everyone was in the center of town…More pictures of the masses.

But don’t worry, Florentine had its share of the masses. Both in Israel’s independence day (end of April) and in the Purim holiday, Florentine’s street parties felt like being in can of sardines…

I’ll keep going out in the city on my favorite days: Sunday to Wednesday. I’ll leave the weekend for the masses from suburbia.